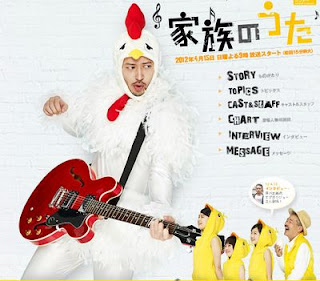 The sexy, talented and polished Hayakawa Masayoshi (Odagiri Joe) once enjoyed tremendous popularity as a member of the red-hot rock band ‘Under Cloud’, sold millions of records at the pinnacle of his career and topped the rankings for the man that women most want to be hugged by. But ever since a spat with his bandmates caused the band to break up 13 years ago, he has slid into oblivion, forgotten by society. It is because his songs after the split became ego trips. His regular job now is a live 30-min radio show from 5.00 am in the morning and has the occasional fan meeting. That is how his life has has been going, but he has a relatively satisfactory life sticking to his favourite music genre of rock. Even so, he enjoys the path he has taken. Then one day, he gets saddled with family and his selfish thoughts and way of life slowly starts to change. Through this, he also gradually becomes a person who shows compassion to those around him and this even influences his songwriting... -- Jdrama Weblog

Email ThisBlogThis!Share to TwitterShare to FacebookShare to Pinterest
Labels: Kazoku no Uta, subs

Soo-jin
I have opened this blog to share softsubs for dramas and Arashi shows, hope everyone will have fun here^^